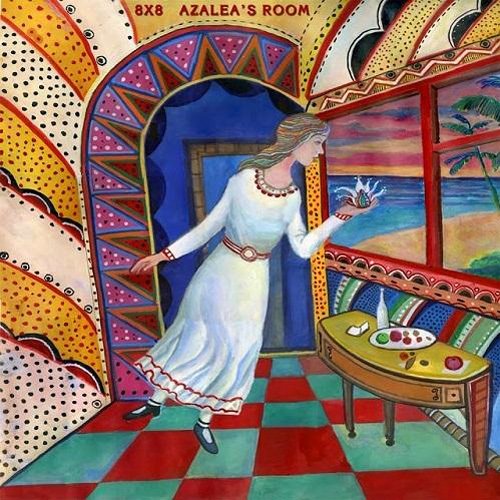 8X8 is the unique and mystical collaboration between Lane Steinberg (New York, US) and Alex Khodchenko (Kiev, UKR). The two have never met in person and have never spoken. Indeed, they would be mostly unable to do so, for they do not share a common language and must rely on online translation programs to communicate. This aside, they have established an effective method of working, trading files back and forth through the internet. Their aesthetic kinship is such that the work flows freely between them and they often anticipate each others comments and suggestions before they are made. The music can be described as psychedelic pop, not in a cliched sense of obvious stylistic reference points, but in its kaleidoscopic vision. Their influences, though easy to glean, fall secondary to the strength of the compositions and their performances.
'Azalea's Room', their 2nd collection, has been two years in the making. The title track typifies the kinetic energy of their process. At first, Alex had a rough track which was labeled, "Azia Brew". Lane then turned this into 'Azia's Brew", which transformed into "Azalea's Brew", before settling into its final incarnation. The song, with it's Arabic sounding melody, speaks of a seaside refuge belonging to a mysterious woman. What follows are songs with far-flung subjects such as star-crossed werewolves, cold war-era spies, a retiring obstetrician, a person trying to erase their identity the internet...not exactly the usual rock n' roll subjects.
Nor is the music anything typical, with its sweeping melodies, majestic cadences, and seamless melding of rock drive with classic and classical influence. Besides the three B's (Beatles, Beach Boys, Barrett), there are also progressive snatches that recall the heyday of Yes and Procol Harum,
"Azalea's Room" closes out with a cover of 'Tears of Rage', the only song written by Bob Dylan and Richard Manuel, which first appeared on the Band's first album, 'Music From Big Pink'.This is the only track with a guest musician (underground legend, R. Stevie Moore, plays bass).The song is a prefect coda to the album and an aesthetic touchstone to everything 8X8 is about - impressionistic, yet penetrating lyrics wedded to a grand melody and delivered with a gentle groove you can turn off, relax, and float downstream to.


Live In Dreamland by 8X8 When Nirvana released their second album, All of Us, they were a studio-oriented group with just Patrick Campbell-Lyons and Alex Spyropoulos left. This album has a really nice swinging 60s feel to it, spearheaded by the delightful Rainbow Chaser, with its melancholic melody and super phased chorus. A true psychedelic classic.

The most remarkable thing about Nirvana's second album is the cover shot which depicts some of world history's most famous figures leading a procession through a mass of dead bodies. Despite this provocative and disturbing image, All Of Us is possibly the most commercial of their albums.

Island records turned down their next album, To Markos III, witch eventually came out on Pye and sold sold practically nothing. Alex quit, leaving Patrick to record two further albums under the Nirvana name, Local Anaesthetic and Songs of Love and Praise.

1 Rainbow Chaser
2 Tiny Goddess
3 The Touchables (All Of Us)
4 Melanie Blue5 Trapeze
6 The Show Must Go On
7 Girl In The Park
8 Miami Masquerade
9 Frankie The Great
10 You Can Try It
11 Everybody Loves The Clown
12 St. John's Wood Affair
+ Bonus Tracks This is the debut album from the English singer and songwriter Keith Christmas. Originally released in 1969 this is a lost treasure on which Keith was backed by members of Mighty Baby who together created a late 60's "laid back Dylan, John St. Field/early John Martyn/Mick Softley/Roy Harper" styled album. The emphasis is on long tracks "Trial & Judgement" (9 minutes) and "I know You Can't Loose"(5 Mins) showing great songwriting and impressive overlapping guitar parts. Keith Christmas also appeared at the first Glastonbury Festival. Released on RCA.